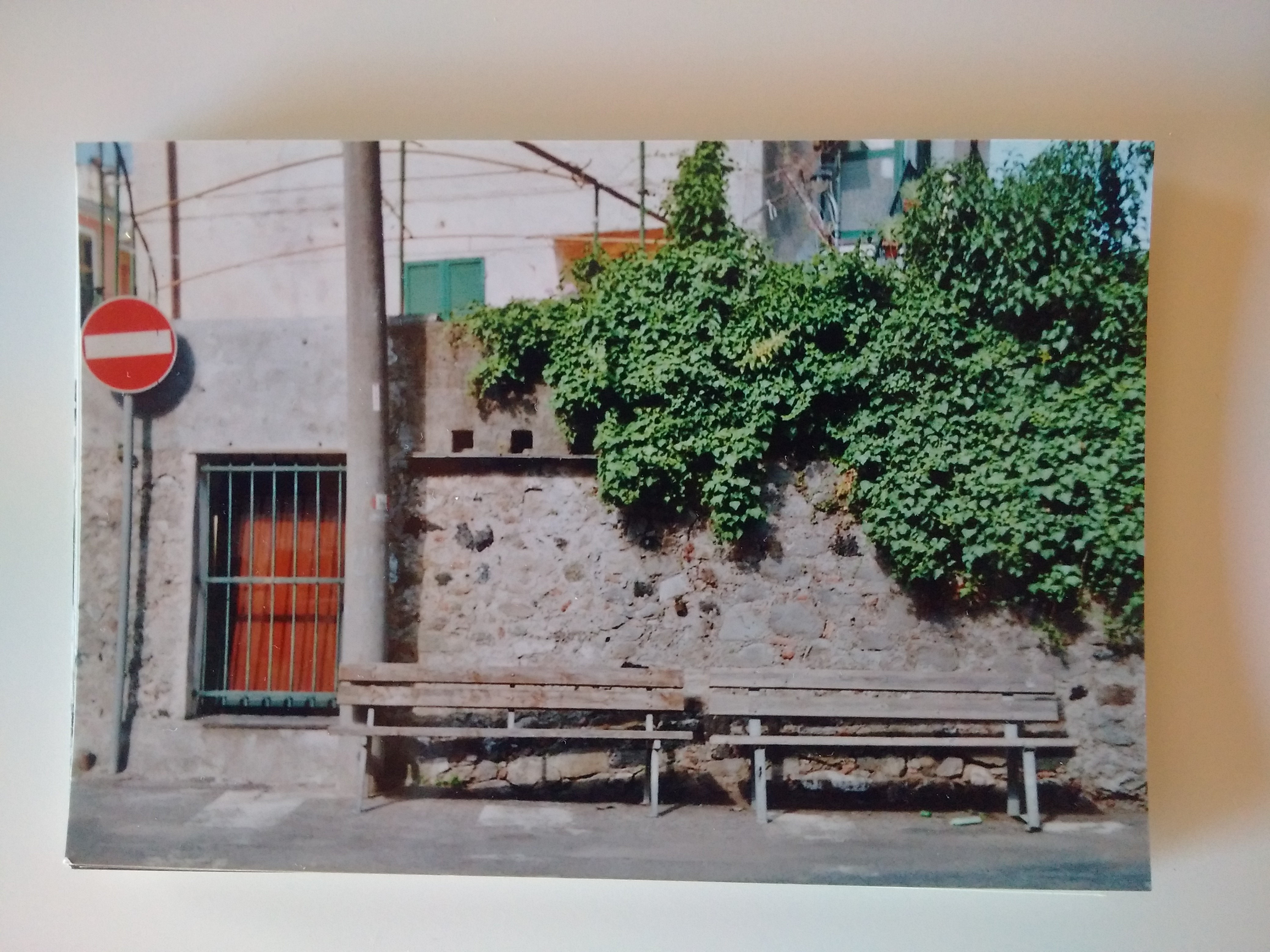 In each of the large black and white digital c-prints of Carrie Mae Weems' "Roaming" series (2006), a woman stands in a long black dress before the uniform grey architectural landscapes of deserted European cities and Roman monuments. She is almost always the only human in the image, her body centered, facing away from our gaze, interceding between the viewer and the formidable architecture that dwarfs her. Looking at the woman’s back, I felt, all at once, that I was with her, and also that I was her. A relation existed between me and the image: in Weems’ works I found recognition. In the time I shared with the images, I experienced not only a deep intimacy, but also a sense of relief.

To me, the spaces in Weems’ photos encapsulate Western history. The empty European cities and stone buildings her figure faces are markers of a culture that had been the unquestioned bedrock of my education as a young Black girl in Canada. Since earning an English literature degree as a non-European learner, I have come to think of my education as something I survived. In most of my courses, the underside of modernity–the souls and goods moved across oceans to fund empire–was taught in fluid ways that never lingered too long on the tragedy and generativity of the middle passage. Deftly avoided were discussions of the ways in which influences on British culture were the upshot of violent imperial expansion. Where, for instance, had Heathcliff really come from? The darkness Toni Morrison describes in her essay “Playing in the Dark,” draws specific attention to this shadowy side of white imagination, where the cognitive dissonance that fostered a European sense of superiority endures. These were the strange uncomfortable aporias I lived through in university, and in Weems’ work, I felt them all over again. Now, however, the figure seems to be bear some of that difficulty.

In these images I see a representation of how I have been oriented within colonial legacies as a person of African descent. Looking, I feel solace, a relation, an echo and a belonging to the figure in the images. Counter to the ocular-centric, temporally linear, individuating ways of knowing and being in which white supremacy thrives, these images seem to allow for an alternative intimacy, or intimacies. [1]

II
On a visit back to Montréal several years ago, I saw an exhibition by the Irish artist Richard Mosse that had an entirely different effect on me. Mosse’s images were remarkable for their composition and their lush shades of red and brown, which resulted from the expired infrared surveillance film he used. The 8-channel video installation The Enclave (2012-13)–projected onto free floating double sided screens and immersed in an amplified original score– is set entirely in the forest of the Democratic Republic of Congo. In these images (both moving and still) are women and children, refugees, and groups of men dressed in army fatigues. The non-narrative footage strung into a vague collage of a story; these figures appear like parts of a poem, their actions untethered to anything practically intelligible. Though I had initially been mesmerized by the intensity and confusion of the installation, as well as the images of unidentified humans in places I had never been to, doing things I did not understand, saying words that were not translated, as I watched I realized that I was seeing images of these people being used to represent the artist’s own adventure into the Congo, not their own lived experience.

Halfway through the 40-minute immersive installation I began to feel sick. The images and footage are edited together in such a way as to make them seem otherworldly and strange. Rather than an impression of the lives of the people depicted, as it first seemed, these representations did not transparently show the true source of their meaning. They were deceitful in so far as the images of black people Mosse presented, in a culture that often readily represent black people as stereotypes, were not telling their own stories. The soundtrack is nerve-wracking, the images disorienting and nonsensical, and ultimately what is recreated/represented in these images is the terror and discomfort of the European artist and his white film crew. The work portrays his discomfort in so far as the sensorial experience it reproduces is one of anxiety, confusion and disorientation. The mood, tone and atmosphere speak more to the artist’s experience of being in the Congo than of any reality lived by the humans who illustrate his adventure. It became clear that the faces and movements of the people in the work, their bodies and rituals, were abstracted and presented to illustrate the artist’s fearful sentiment, and it made me more and more uncomfortable and angry. I was angry that the other spectators might think they were faithful representations. Watching The Enclave I was removed and disconnected from representations of Black people because they were untrue. Here was a white European artist using his vision of an African “Other” as a foil to present his own feelings. What remains disturbing to me is the enormous power differential between Mosse and the Congolese people he filmed, and his unrelenting abuse of that power.

I want to consider the ethics of images. Such an assessment requires an attention to the politics of the relationship between an artist, their subject and the spectator. I want to uphold ethics as an essential component in understanding and examining works of art, criteria that is just as important as an assessment of successful aesthetic prowess. One of the ways photographs gain power is in their ability to reflect the viewer by articulating particular feelings or ways of being in the world. Historically, representations of Black people have often been violent. Black artists and photographers have had the implicit prerogative of creating representations that work against these kinds of images. In her talk “A Dark Horse in Low Light: Black Visuality and the Aesthetics of Analogue Photography,” the artist and scholar Michèle Pearson Clarke begins to do the work of tracing expanded ways of thinking about the history of photography. She asks: “When, in the history of analog photography, have we been able to truly ‘see’ Black folks?” Clarke observes that not enough time has been spent thinking about the methodology of Black creative practice in photography and she is convinced that the materiality of how Black photographers make and remake images, and with which tools, is closely tied to how these images make us, Black viewers, feel.

The idea that there is something to be gleaned from the affect caused by analogue photographs is my point of departure. Though Weems’ series is digital, and so may not operate on the exact affective register that Clarke explores, I was moved by them in a way that resonates with her analysis. For me, the significance of that affect is related to the politics of the image, and so I believe that these are ethical considerations. One might ask Does this matter? If so, Why does it matter? And To whom does it matter? I believe these considerations are important because they inform the final aesthetic of an artwork. Some would argue that art should be provocative, but this is a typical reading that overlooks the unequal social hierarchies of a world shaped by empire. Though artistically speaking, being provocative is not mutually exclusive with being unethical, it’s important not to stop at this easy justification. Ethics are foundational to the functioning of so many disciplines (think of medicine or law or academia), yet they have still not been integrated into discourses on the creation of art. How an image can make you feel solace rather than revulsion may be caused by the way it is made and not simply the way it looks. That is, one could find many arguments for or against the value of a work of art that do not take into account how it makes the spectator feel, and how it ethically approaches its subject. This requires a political self-awareness on the part of the artist.

And so: To whom does it matter? Although it should concern us all–artists and art works connected to the sphere in which we present and discuss art in (relation to) the world– I am singularly concerned with folks whose experience of marginalization, like mine, continues to make viewing contemporary art disturbing in small, inarticulable ways. Ethics are related to the basic rights and wrongs of humanity, what we have loosely codified as human rights and social justice. Oddly, when it comes to reflecting on art, talking about ethics is as difficult as speaking with a mouth full of marbles. In the interest of representational justice, and of pursuing equitable art practices that don’t perpetuate the world’s violence, we must be clear minded about what constitutes representational violence. To practice representational justice means approaching subjects with care, and being always mindful, especially when creating visual representations, of the larger structures of colonialism and white supremacy that determine our relationship to those we are representing. To disregard our own subject position, especially when it is implicated in power differentials, can lead, as in The Enclave, to representational violence.

What I want to suggest, following Clarke’s line of inquiry, is that there is a connection between the materiality and methodology of photography, and ethical regimes of representation. The ability to see Black people in photos is related to how the photographers make and present those images. A practice of examining how images are made is essential to establishing ethical considerations of works of art. This isn’t about assessing good or bad photography, for me, it’s about finding what is ethical and unethical in works of art. There is a relationship between the photographer, their subject, the image they create and the viewer. In this nexus, I think, is where the danger can happen. The intimacy of images is a part of their power. The medium is by nature life-like, and the verisimilitude of representational images can be difficult. Like the easy insertion of a sharp blade into your gut, an image can strike you viscerally, enter without being asked. This closeness between photo and viewer requires responsibility, which can be observed in the ethical considerations of the photographer’s approach. When we think about photographs, let’s think about how and where they were made, who the photographer is, and how they make us feel. Only the sum of these factors will give us the due caution and a wide enough scope to be able to situate the images politically, ethically, and aesthetically.