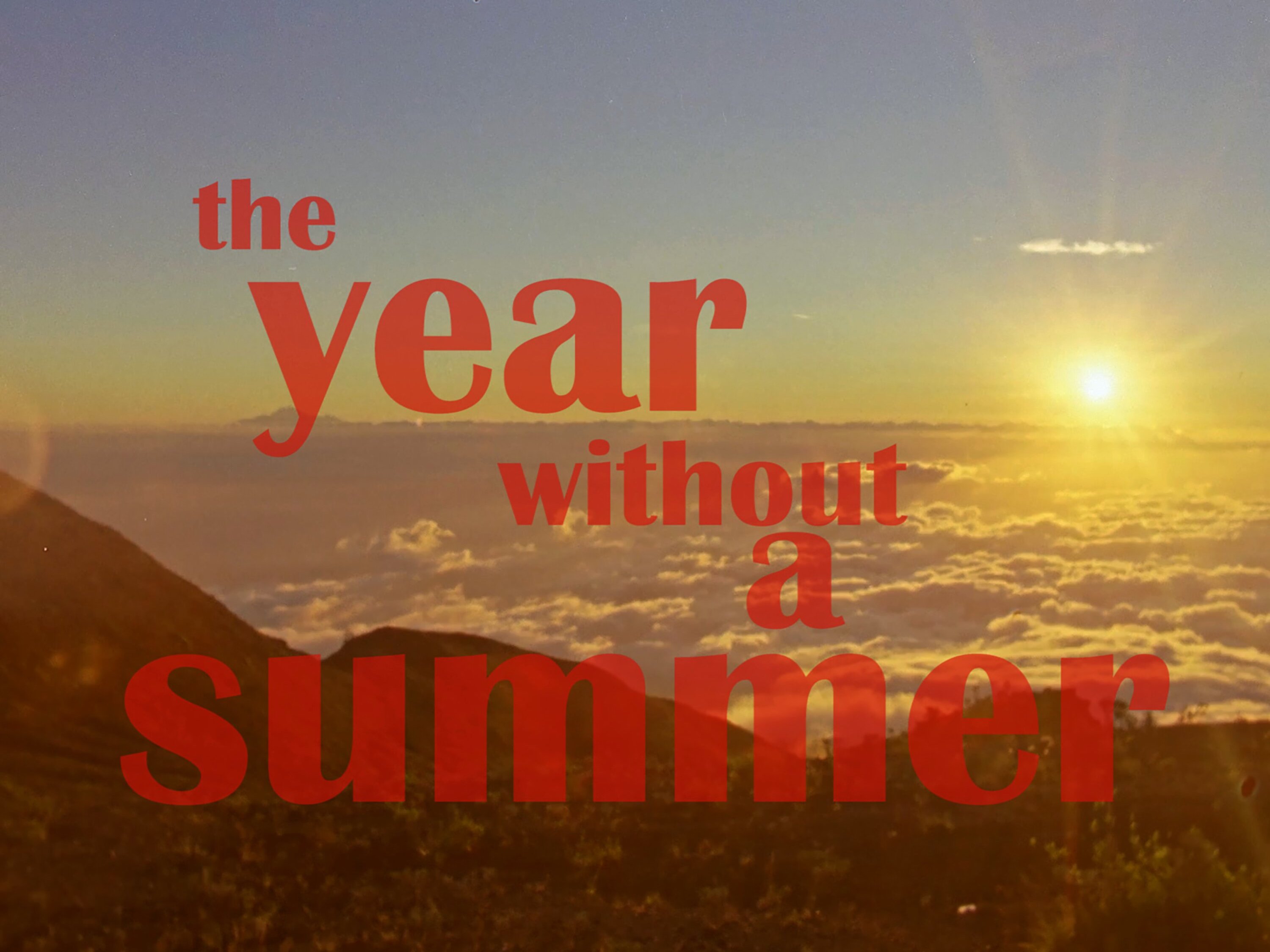 The Year Without a Summer: online screening and artist talk

When Mount Tambora erupted in 1815, it was the largest volcanic eruption in recorded history; it altered weather patterns all around the world the following years. Not only did thousands of people die from the explosion itself, but from the widespread famine that occurred globally due to damaged crops and agricultural disasters as a result of the incredible weather change. As volcanic ash, torrential rain and cold weather descended on Europe and North America, 1816 became known as the year without a summer.

Elise Rasmussen's forthcoming exhibition, The Year Without A Summer, is the culmination of two years of textual, locational and studio-based research by the artist, which took place in Indonesia, Switzerland, and Los Angeles. In this work, she weaves intricate connections between the 1815 eruption of Mount Tambora, its global climatic effects, and Mary Shelley’s authoring of Frankenstein. ‍The exhibition includes a large projection with 4-channel audio, alongside photographs and cyanotypes.

While the exhibition's opening at Gallery 44 remains postponed through this period of lockdown, Gallery 44 is pleased to present a screening of Elise Rasmussen’s video work included in the exhibition followed by a question and answer period during which, Elise and writer and curator Lauren Fournier will discuss the video, and the context for the exhibition.

Lauren Fournier is a writer and artist-curator. Raised as a working-class, white settler on Treaty 4 lands, Saskatchewan, she is currently based in Toronto. Her book Autotheory as Feminist Practice in Art, Writing, and Criticism was recently published by the MIT Press (2021), and her debut novella is forthcoming through Fiction Advocate in San Francisco (2021). She teaches courses on visual concepts, artists' writing, and autotheory and autofiction through the Daniels Faculty of Architecture, Landscape, and Design at the University of Toronto. She is the director of Fermenting Feminism, an ongoing, site-responsive curatorial experiment that takes place trans-nationally. Lauren’s work has been featured and reviewed in such venues as T: The New York Times Style Magazine, The Brooklyn Rail, Kunstkritikk, n*paradoxa, A*Desk Critical Thinking, Degree Critical, Art the Science, CMag, High Theory, and The MIT Press Podcast.

Elise Rasmussen is a research-based artist working with lens-based media. She has exhibited, performed and screened her work internationally including venues such as the Brooklyn Museum, the Bronx Museum, Pioneer Works (New York), Night Gallery, JOAN (Los Angeles), Haus der Kulturen der Welt (Berlin), Belvedere 21 (Vienna), Sharjah Art Foundation (UAE), Institute of Modern Art (Brisbane), Dazibao (Montreal), Art Gallery of Alberta (Edmonton), and the Doris McCarthy Gallery at the University of Toronto. Elise received her MFA from the School of the Art Institute of Chicago on a Merit Scholarship and has been an artist in residence at a number of institutions including the Irish Museum of Modern Art (Dublin), the Nirox Foundation (South Africa), La Becque (Switzerland), LMCC (New York), Shandaken Projects (Storm King), SOMA (Mexico City), the Banff Centre (Alberta) and was a 2016 Fellow in the Art & Law Program (New York). Elise has been written about in publications such as Art in America, BOMB Magazine, Hyperallergic, Canadian Art and The New Inquiry, and has received grants and awards from the Jerome Foundation, the Canada Council for the Arts, NYFA/NYSCA, Contact Photography Festival, and the American Austrian Foundation. Born in Edmonton, Canada, Elise is currently based in Los Angeles, CA.